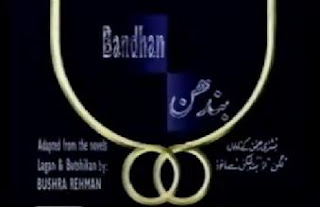 It’s an adaptation of Bushra Rehman’s ‘Buut-shikaan’ and ‘Lagan’. A bit of overacting (some critics might say alot) and with a story which is not so real.

The play is watchable because it’s pretty funny (especially the quips between the husband and wife) and as always it’s fun to watch Nadia. Noman Masood does a good job but looks uncomfortable doing the romantic scenes and thus comes across as a little unbelievable.

I hope his talents don’t get wasted doing “vadera”-type roles. The character that comes across as a fairly strong and realistic one is that of Qutub sahab. He does a fine job in his small role. The play was a bit confusing to me because I couldn’t figure out why a guy would marry someone because he likes her and then treat her like Aafaq does Faree. Nobody leaves their wife on the night of the wedding to go drop off their mother! - quite a ridiculous scenario. Aafaq has this huge ego which he can’t get rid off and Faree is raised in a rich and sheltered enviroment and has no manners whatsoever. Then there is a classic textbook version of fraud that Faree has to deal with -again highly unbelievable that someone so educated would fall for such antics. The story deals with Aafaq and Faree’s struggle to put aside their differences, but terribly fails to show a realistic account of a marriage. There’s also a side story about how another girl, Dilnawaz comes to terms with her life. It’s like watching a silly version of Aanch. Entertaining -yes; realistic -partially.